As the days, weeks and years tick by in “Progressive Austin,” there is one simple basic need that seems to elude the public officials, paid consultants and public engagement document and pamphlet designers. It’s something called a grocery store. Probably most of you reading this can get to a grocery store without too much time or trouble. Even I can do it, despite not being able to drive. And the walk got easier after City Public Works finally fixed a huge pothole on Possum Trot after five attempts last year.

But it is no secret that some of Austin’s economically challenged neighborhoods have few grocery stores or none at all. Some of these communities are located in Northeast Austin, Southeast Austin and far South Austin. The Colony Park neighborhood is one example. In nearby Walter E. Long Park, the height of the weeds is surpassed only by the number of years of master planning and official lip service. Those efforts have failed to produce anything beyond a failed November 2000 bond election for a golf course and hotel. Then came the 2014 proposal to put in two privately owned luxury golf courses without a public vote, in apparent violation of the City Charter.

One thing that the Colony Park Neighborhood and probably most other neighborhood associations would agree on is the need for access to grocery stores. We have heard all the arguments about high construction costs and whether the disposable income in some deprived areas could support grocery stores. And after all, it is largely a decision that has to be made by the private owners of such stores. But here’s a suggestion. How about looking into how other cities, counties and various researchers have approached this problem? What potential solutions are out there, and could some of them be successfully applied here?

This Picture Is Worth at Least a Thousand Words, If Not More

Perhaps this picture and the link beneath it will point somebody down at City Hall or at Travis County in the proper direction. It’s a screenshot of one page of Google search results. Feast your eyes on what the search revealed. It should certainly give us some food for thought (pun fully intended). Click here to see the picture.

To do the Google search illustrated above, click here.

There is a brand new set of City-sponsored public process documents here. 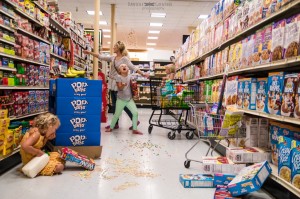 Heartwarming movie about a 1960’s housewife and her affordability problems. The grocery store scene is one of the many highlights:

Musical accompaniment for this blog posting: