All of us would probably agree on the need for safe, affordable transportation options here in Austin. But the heated debate between the “Pro” and “Con” folks fighting for your support in the upcoming May 7th Proposition One election has gotten a bit ugly. Regardless of which way you happen to be leaning, you have probably heard the shouting about the need for honesty, integrity and fairness. Today, this blog has obtained an exclusive advance copy of a formal ethics complaint soon to be filed against the Pro-Uber, Pro-Prop One campaign. That complaint appears in its entirety below:

Formal Ethics Complaint
Filed in the Umpteenth District of Travis County, Texas
In the Court of Public Opinion

The factual basis for this complaint arises from Against Prop One handing of Ethics Complaint #1 vs. Pro Prop One, and relies in part upon current information as well as ongoing cases of a similar nature.

The case at hand being on the matter of certain transportation network companies seeking to avoid specific regulations imposed by the City of Austin. To wit or without wit, be so however, the requirement of fingerprint-based criminal background checks. As well as other requirements set forth by City Ordinance.

We hereby accuse For Prop One of violating the basic standards of truthfulness, misleading the public, and committing acts of fraud and misrepresentation. The allegations regarding Pro Prop One’s conduct are summarized as follows:

We dutifully wish to thank The Court for your consideration and anticipated cooperation.

The views expressed in the ethics complaint above may or may not represent the views of this blog’s sponsors or its advertisers (of which there are none). Voters are encouraged to study the issues in the May 7th proposition election very carefully. Accepting the accuracy of any verbiage – in audio, print or video format without careful verification is not recommended. Regardless of your own personal viewpoints for or against Prop One, let’s keep in mind that the City of Austin maintained a proud public slogan for several decades, “Austin the Friendly City.” To those who support or condone highly negative and divisive discourse, on either side of a political issue, we would suggest that Austin is simply better than that. We should encourage proposition supporters and opponents to offer up clear and unambiguous facts to the public. And in the spirit of our great democracy, “may the best side win.”

What Will Happen If Uber Leaves Austin?

Thankfully, there is an innovative invention that solves that disturbing dilemma. Even before the results are announced for the national “Smart City Challenge,” Austinites can rejoice as we look forward to our single, united transportation and housing solution. In a rare cooperative effort by the City’s Transportation and Housing Departments, plans have been announced (but not publicly yet) to revive a 1925 invention by the Studebaker Automobile Company.

A modern version of the 1929 model of the Studebaker House Car is envisioned to be ready to roll on Austin streets and toll roads by 2021. City officials are even considering allowing them on free highway lanes as well. In its first year on the market, Studebaker sold 2,225 units. By 1928 an eight-cylinder model was introduced. By sometime in 2021, Austinites will no longer have to fret over sitting in traffic. Or having to pay high rent or high property taxes. The new fleet of house-cars will allow everyone plenty of time to enjoy themselves, no matter which road they are stuck on. We will have total gridlock by 2021 on most of our roads. So, why not just put people in these innovative house-cars, so they can live out their lives blissfully? Even if they are permanently stranded in traffic. While the average price for these vehicle-houses has not been determined yet, it will be a small price to pay for peace and comfort. 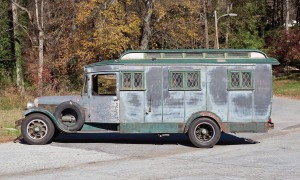 Musical accompaniment for this blog posting: