Austin is well-known for its highly educated work force. We have a population that reads more books than in a lot of other cities. For that reason, George Orwell would draw a good crowd at Book People if he could time travel over there in a few weeks. What’s happening now in the Prop One election campaign is like something straight out of Orwell’s classic, “Animal Farm.” My favorite line was the big message that appeared on the side of the barn one day, “All Animals Are Created Equal, But Some Are More Equal Than Others.”

You could pick any number of taglines from the deceptive Pro-Prop 1 ad campaign, and see the eerie similarities between the messaging laid out in George Orwell’s novels, and the real-life future that he predicted so well. But this time there is one big difference. You have a chance to change the ending of the story. You can get out there and VOTE AGAINST PROP 1 before it’s too late. Early voting is already underway. And in case you were wondering if this would happen…well, sure enough it did! Lyft is now offering free rides to and from the polls. Travis County officials apparently believe that it’s legal. Drivers will receive $10 credits for each ride.

Vote Against Prop 1 and Click Here to Donate to “Our City, Our Safety, Our Choice”

After my last blog piece on this subject, one commenter wondered what this issue has to do with affordability. Well, for one thing, the City estimates that running the election will cost between $500,000 and $800,000. Not only that, I scratch my head every time I read about a less- than-sober Uber rider who wakes up alive the next morning…minus upwards of $150 to $200 against his credit card for a “surge pricing” Uber tab. (Sometime next year, we can all look forward to “surge pricing” on toll roads, starting with the new lanes on North MoPac. The CTRMA calls them “managed toll lanes.” More on that at another time).

So, What Comes Next If the Voters Fall for the Misleading Ads and Vote for Prop 1?

We would have to wait two years for the next eligible time for a petition-initiated election. But just imagine what is probably already being cooked up in some conference rooms around Austin. Who knows which corporations will be first in line for the next referendum ballot. Maybe it will go something like this. The large industrial and other big business electric customers could write a new City policy for the management and control of Austin Energy. In the new policy, these corporations would hand-pick the board of directors for Austin Energy. Then they could set their own electric rates and build the least environmentally friendly power plants.

Your mailboxes, your radios and your TV’s would be filled with positive, cheerful Orwellian messages:

“Vote Yes for clean, affordable and reliable energy in Austin”

“I want the lowest electric rates in the State of Texas. That’s why I’m voting yes.”
“I’m voting yes too, Sally. Let’s ask our friends to join us. We all need to vote yes.”
“Yes! Yes!…Ohhh…Yes! 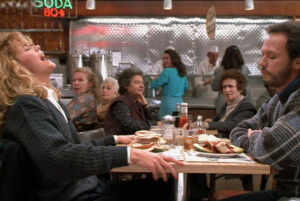 Meg Ryan in the restaurant scene from “When Harry Met Sally”