In the summer of1985, I took a seat behind a nameplate on the City’s Electric Utility Commission. This was my first meeting as its newest member. City Council Member, George Humphrey had appointed me. This followed a fun adventure that concluded on a happy note the year before. It began in 1983, when I read a newspaper headline that the City had approved a whopping 20% electric rate increase.

During my lunch hour that day, I left the accounting office where I worked, and walked over to City Hall. For the next three weeks or so, I stayed up late in bed, scrutinizing the City Budget by lamplight. How could such a huge rate increase even be possible? One lucky night, I hit the jackpot. It was all right there, in a single “magic sentence.” It said that the 20% rate increase “is based, in part, on the successful passage of the lignite bonds in the November bond election.”

Well, the City Budget was adopted in late September, to take effect on October 1st. Thanks to Max Nofziger’s “Austinites for Clean Energy” activist campaign, the lignite coal bonds failed, by a margin of 61% to 39% (See Prop. 2). I did some other Budget calculations, and came up with a proposal to cut the rate increase by half, down to 10%. The Electric Utility Commission accepted it, and made the recommendation to the City Council. The 10% reduction became official at the City Council meeting on April 12, 1984. (See Page 3, Electric Rate Ordinance).

“Cost of Service” Emerges As a Rate Case Lynchpin

At my first meeting on the Electric Utility Commission, I was introduced to a whole new world of confusing jargon. We met at the old Electric Building Auditorium at 301 West Avenue. At each meeting, we received agenda packets stuffed with papers and documents. It wasn’t long before we found ourselves embroiled in a major rate case. That was my initiation into the mystical and mysterious realm of “cost of service.” A more formal name for it is “cost allocation.”

Don’t get scared off! Don’t quit reading! I will make this simple and painless, even fun…

I quickly learned that phrases used by City Staff should not be taken at face value. One should always ask questions and do research. “Cost of service” is based upon a specific model, and there are many different models. The rate cases in the mid-1980’s featured intense battles between consumer advocates and industrial ratepayers. Cost of service always took center stage..

Here’s the bottom line on the different models. The industrial ratepayers favored an antiquated model, that some say dates back to the jazz age – when you could buy an Edition phonograph, or one made by the Victor Talking Machine Company. That model lumps all the power plants together. Then it assigns the cost allocation to each class of customers.

That model is simplistic, flawed and unfair. Industrial power comes primarily from expensive power generation sources that are used 24/7. Residential power comes primarily from cheaper generators, and used during peak hours of the day. Consumer advocates prefer a modern, sophisticated model, that allocates cost based on numerous factors, including types of power generation, time of year, hours of the day, etc.

We often debated those 1980’s rate cases in a packed City Council chambers. One of those lively public hearings happened during the 1987 primaries for the next year’s Presidential election. Gary Hart was the Democratic front runner, to take on George H.W. Bush. But Hart was in a heap of trouble over a mistress, a model caught nestled in his arms, on a boat named “Monkey Business.”

I argued to the City Council that that the Electric Utility should not switch to the industrial ratepayers’ favorite cost of service model. To attempt a bit of humor, I said “Even Gary Hart didn’t change models.” He at least appeared to remain loyal to his one favorite mistress, Donna Rice.

Here we are folks, over 35 years later, and we’re still stuck with business as usual. The Electric Utility Department has rebranded as Austin Energy. The funky, stacked Independent Condos Tower now stands where the Electric Building Auditorium used to be. The iconic “Katz’s Never Kloses” deli, down the street at 6th and Rio Grande, got gentrified into oblivion several years ago. But, the very same electric cost of service models are once again being tossed about in this year’s rate case. 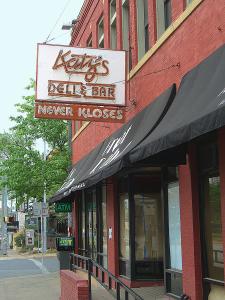 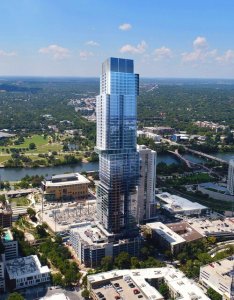 The Graphics That Should Steal the Show

With online research, it’s exhilarating to turn over a rock and discover a gold nugget. These images come courtesy of the Regulatory Assistance Project, as presented to the Rate Design Subcommittee of the National Association of Regulatory Utility Commissioners in 2020 (Section 4, Pages 22-23). These were identified as Best Practices. Click each image to enlarge it: 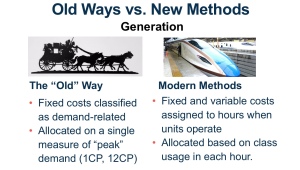 One of the “old ways,” shown in both graphics, is Austin Energy’s current method, the 12CP Model. In their final rate filing brief, the TIEC, Texas Industrial Energy Consumers, endorsed their same, worn-out 1987 model. Here is a statement from their brief, “TIEC’s witness, Jeffry Pollock, recommends the Average & Excess Demand (AED)-4CP allocation method, which has been consistently used for Texas utilities under PUCT jurisdiction for decades (their italics).” (See Page 3 from their brief). But, Texas has also had horrifying child foster care conditions for many years. Both are unacceptable.

The City’s Independent Consumer Advocate has this to say about cost of service, “The BIP methodology represents a more reasonable approach to allocating production demand costs than the 12CP or the A&E-4CP methods. The BIP is a method which more reasonably balances the interests of AE’s customer base by recognizing both reliability and economics. Furthermore, BIP recognizes the prevalence of meeting ERCOT loads…” (See Page 26).

In 2011, Austin Energy held a rate review, which included a Residential Rate Advisor. The Advisor’s report contains extensive justification for adopting the BIP cost of service model. Here is the statement in the Executive Summary: (See Page ES-1):

My Suggestion – Base-Load Intermediate Peaking – (BIP) method be applied, as it is consistent with the Electric Reliability Council of Texas (ERCOT) deregulated market design and use of facilities.

Austin Energy Recommendation – Average and Excess Demand (AED) method applied, as it is commonly, but not uniformly, used in regulated markets.

Here is an update on an aging model that I mentioned. Donna Rice is doing quite well, and she’s making a positive contribution to society. For many years, she has been working to promote a safer Internet for children. She heads an organization called Enough Is Enough.