In just 32 hours, after the winter storm was over, ERCOT billed enough electricity charges to fund the entire annual budgets of Texas’ four biggest cities combined. Read on for further details…

We know that the Big Boys on Wall Street are thrilled with their massive windfall in ERCOT’s utility pricing overcharges. They and our governor would like everyone else to just butt out now, and leave well enough alone. The Chairman of the Public Utility Commission was caught on a recording, promising to protect the Wall Street profits. The Texas Tribune recently published an article entitled, “Experts Fear Reversing Electricity Charges Will Make Things Worse.”

Why? Because “That might have a chilling effect on companies wanting to come in and invest money in Texas.” Those same “experts” insist that consumers would not be affected if the overcharges were paid back. So, we pay more when the price goes up, but if it came down, with a huge price correction, we would get nothing. Huh?

In Austin, over a dozen people were hospitalized with frostbite. Eleven feet were amputated, and five people had both feet amputated. They will be disabled for the rest of their lives.

1. Take a guess at how much this year’s entire city budgets for Austin, San Antonio, Dallas and Houston add up to. Here’s the simple math:

That’s roughly a quarter of a billion single dollar bills. Those would wrap around the world 4 times to reach $1 billion. So, it would take 4 times 16, which is 64 times around, to reach $16 billion with $1.00 bills. For $10 bills, it would be one-tenth of that, which is roughly 6 times.

3. Austin Energy’s annual budget is now $1 billion. So, at the current rate, a $16 billion windfall would keep the utility running for 16 years!

Just take a deep breath and try to swallow this – In just 32 hours, after the storm was over, ERCOT billed enough electricity charges to fund the entire annual budgets of Texas’ four biggest cities combined! If that doesn’t tell you that we need serious reform of our power grid pricing system, then nothing will.

Two interesting questions – How many fully weatherized new power plants could be built with $16 billion? And how much of that money, plus the profits earned during the storm actually be used for that purpose?

We’ve heard a lot about “winners and losers.”  So, who are the winners, and what are they going to do with all that money? We deserve a full accounting of what happened to the entire $16 billion, including the $12 billion or so that was supposedly “settled.”

For the Readers: A Simple Multiple Choice Question

The assertion that Texans should shrug off ERCOT’s $16 billion in overcharges, because it wouldn’t make any difference is:

A. Tommyrot
B. Poppycock
C. Balderdash
D. Bull-Malarkey
E. All of the above

If you answered “E,” then congratulations, you passed the exam. But don’t expect any kudos from ERCOT, the Public Utility Commission or the Governor’s office. They are all out to lunch! 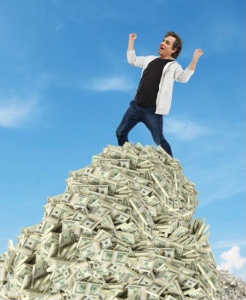 Musical Accompaniment for This Blog Piece