The Washington Post reported on Friday that the peak toll rate on I-66 leading from Northern Virginia into Washington D.C. hit $44 on Thursday morning. Just looking at the sign is enough to make you gasp. Yes, Virginia, there is a Santa Claus. But look out for the Grinch! Virginia Transportation Secretary Aubrey Layne told the newspaper earlier this month that the tolls are higher than many anticipated. But, he said, “There is nothing unfair about the new system. It is working as intended.” However, this past Thursday, one angry driver tweeted the photo shown below, with the hashtag #HighwayRobbery: 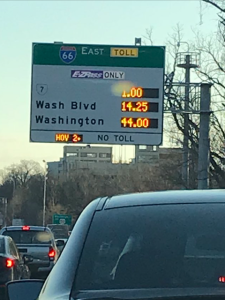 Central Texas Officials Should Learn a Lesson From Virginia

Just like Texas, Virginia has a town called Fredericksburg. Drivers there have been seething mad about high tolls on “managed lanes” for quite a while now. Their local newspaper even has a transportation column called, “Getting There,” just like the Ben Wear series in the Austin American-Statesman. Check out this fascinating quote from a “recovering I-95 commuter” who quit using the Fredericksburg, Virginia toll road:

“This column recently ran figures tallied by a Stafford County resident who gave up commuting because of the costs. His calculation came out to $26.30 to travel to work and $35.55 to travel back home, or $526 monthly to get to work and $711 to get home, totaling $1,237 monthly. The recovering commuter found that if he hadn’t gotten off the toll wagon, his commute would run him about $15,000 a year.”

You can read my recent op-ed in the Austin American-Statesman on the foolhardiness of tearing the guts out of I-35 over several years to put in four “managed toll lanes.” Last week the Texas Transportation Commission reaffirmed Gov. Greg Abbott’s and Lt. Gov. Dan Patrick’s mandate to kill the I-35 toll lane proposal, at least for now. The managed-lane mania that is sweeping Central Texas cannot be allowed to continue!

Back in November, the Dallas Morning News reported on a new group of highway industry interests who have launched an effort to promote toll roads. They are calling themselves “Texans for Traffic Relief.” Group spokesman David White had this to say in the press announcement. “Raising taxes is off the table, so if we aren’t going to take advantage of innovative opportunities to fund our roads, then I guess we can just ask Santa Claus to pick up the tab.”

But Poor Ol’ Santa Is Facing Problems Of His Own!

Let’s take a whimsical look at what might happen to The Man With the Beard and the Sleigh just a few years from now. At a future Texas Transportation Commission meeting, here’s what will probably unfold:

“Mr. Chairman and Commissioners, I represent the CTRMA, the Central Texas Regional Mobility Authority. Our toll collections on North MoPac and South MoPac have far exceeded our expectations. We are so delighted with the huge, expanding revenue stream that we would like to be first in Texas to propose a bold new initiative.”

“Today we are announcing a project called “Sky Lanes Texas,” which will be the nation’s first venture into managed toll lanes in the sky. We believe that innovation is the key to solving 21st century transportation challenges. The rapid proliferation of driverless sky taxis, Amazon delivery drones and other new technologies calls for us to come forward with a safe and effective system for relieving traffic congestion in the sky.”

“Since we are approaching the Christmas holiday season, let me address a persistent issue regarding a Mr. Kris Kringle, sometimes known as Jolly Old Saint Nick, or Santa Claus. CTRMA has been asked to clarify whether this gentlemen will be permitted to access the Texas Sky Lanes without paying any tolls. Our Board of Directors has accepted the recommendations of both consultants that we hired. Mr. Claus and his reindeer will be placed into the same category as wounded and disabled U.S. veterans. While we appreciate his service to Texas children, we will not be offering him free Sky Lane access at this time. But I would like to take this opportunity to wish all the good citizens of the Great State of Texas a very happy holiday season, and…especially…a very prosperous New Year!” 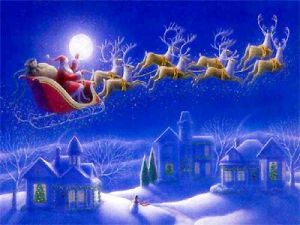